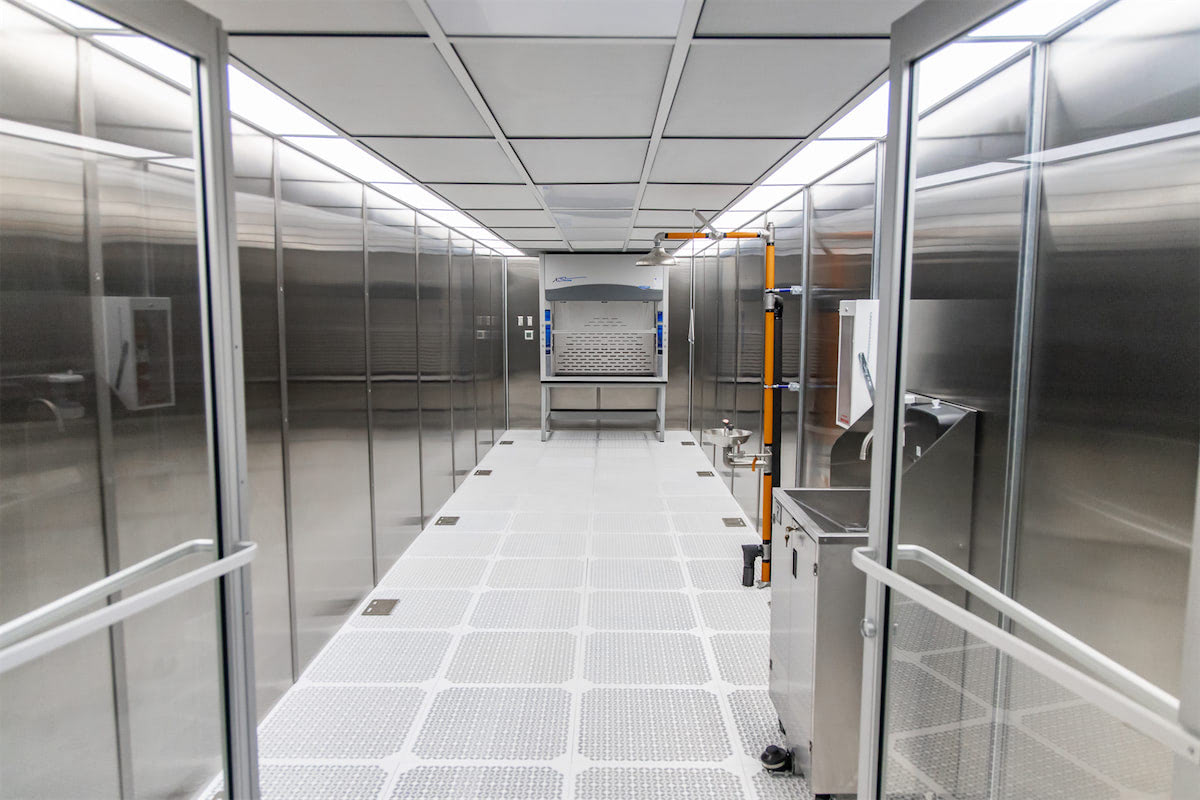 Since their first inception at Sandi National Laboratories in 1960, cleanrooms have become an essential part of industrial production and scientific research. Designed to minimize the levels of particulates and organisms, they traditionally require a lot of planning and lead time and not a little real estate that limits many would-be users.

Mobile cleanrooms (MCRs) are a relatively recent development and Astro Pak has built its fleet of these portable facilities, both for on-site use by its highly-trained technicians and for customization and use by clients. These 48- and 53-foot trailers are game-changers for many situations while bringing cleanliness standards that rival larger, first-class facilities.‍

If a company does not own its cleanroom facilities, it has to resort to hiring a Contract Manufacturer (CMO). Frequently, this means “getting in line” behind however many other clients or projects that have already booked the CMO’s people and facilities. This can mean wait times of between 6 and 12 months before the first batch is started.

If on the other hand, the company is willing to invest in its facilities, it can take 12 to 16 months for a dedicated space to be made operational. That is also a lot of capital being tied up at the beginning of a project with a delayed return on the investment measured in years.

Within the industry, it typically takes three months for a mobile cleanroom to be made available and brought onto the customer’s site. Astro Pak’s track record has customers working on their first clinical batches within a month of requesting an MCR.

Another complication when using a CMO is that steps must be taken to ensure that not only does the contract facility have any needed proprietary equipment and processes put into place, but steps must be taken to ensure that none of the customer’s Intellectual Property (IP) is compromised. By bringing in a mobile cleanroom and staffing it with the client’s personnel, not only is the whole risk to IP avoided but since they are already familiar with the company’s processes, there is no delay due to having to train up outsiders to perform the work as desired.‍

Likewise, by using the company’s personnel, there is no communication lag between the research and development staff and the production team. If new processes are developed or formula changes are required, then these are shared in real-time among colleagues who are not only used to working together but who are most likely located on the same campus. This is as opposed to contract personnel in an unfamiliar facility that may be out of town or even out of state, adding the delay of travel time before such changes can be implemented.

Another factor of production control is the proximity of the mobile cleanroom to the company’s facilities. This gives the customer a much higher degree of control of their production schedule. If production needs to ramp up, it is a simple matter of assigning additional personnel to the task, as opposed to having to request further assets from the contractor. If the contractor does happen to have those additional bodies available rather than working on other assignments, then they would have to be brought up to speed much like the original crew, and with the same lag time.

Having the control inherent in using their staff gives companies more mastery of their destiny and deadlines.

Going hand-in-hand with production control, customers utilizing a mobile cleanroom can see similar efficiencies in conducting research. Because they are in control, it is easier to ensure that clinical processes have higher repeatability. This allows for enhanced control of the variables involved in performing research. The philosophy of “failing fast” to gain incremental advancement works best when the results can be communicated fully and quickly, such as among members of the same team. The result is ideally a sped-up timeline to achieve breakthroughs and success.

Because the trailers housing the mobile clean rooms can be easily placed in a parking lot immediately adjoining existing facilities, they offer the opportunity to rapidly surge testing along numerous promising lines of development without teams having to fight over limited space.

Astro Pak can rapidly customize the MCRs to fit the customer’s specific needs. Requirements for more power, antichambers, nitrogen or specific humidity requirements are just some of the aspects that can be addressed. Depending upon configuration, the trailers are certified up to ISO4 (Class 10) which allows them to serve a broad range of applications. Their self-contained nature allows work to continue year-round in any environment.‍

It has perhaps never been more true that “time is money” given today’s fast pace of development and the need to be first to market. On that basis alone, the mobile cleanroom’s ability to be on-site, customized to the specific need, and staffed by the company’s team within a month makes them a game-changer. Beyond that, there are the obvious savings in capital costs from acquiring real estate, getting permits, and building and certifying a dedicated structure. And even if such a bespoke facility isn’t utilized for an extended period afterward, its ongoing costs are still showing up on the books. On the other hand, when the need for the capacity provided by the mobile clean room has been satisfied, the trailer is removed along with the continued related costs.

Similarly, if a dedicated facility is planned for the long term, or if the existing location is being upgraded or renovated, then the MCR serves as a bridge, keeping the customer’s highly trained (and no doubt highly paid) personnel working efficiently.